All about sea world information and activities

Divers will absolutely like this site for wreck diving. The wreck, lying in more than 120 meters of water off the coast of Tripoli in northern Lebanon, it is in a vertical position, with about a quarter of its length buried in the sea floor. It is thought to be the only known shipwreck in the world in a 90 degree position.

The wreck of HMS VICTORIA has been registered on the general list for historic monuments in Lebanon, by virtue of the Minister of Culture’s decision nr. 17, dated 24th of February 2011. That means that the wreck, now listed and classified as historic, is under the protection of the MoC, in accordance with the Lebanese law for antiquities.

I will let you enjoy some images of the HMS Victoria Wreck, after that I’m very sure that you will be interested in reading the history of HMS Victoria and her finding process. 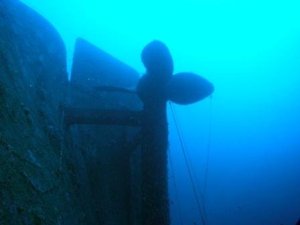 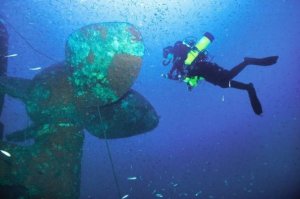 On June.22, 1893; the Royal Navy’s Mediterranean Fleet was about to anchor off Tripoli, Lebanon.

HMS VICTORIA was the flagship of Admiral Tryon, Commander in Chief, who was conducting Maneuvers before anchoring. He ordered that his ships form two columns, one led by him and the other by his second in command, Rear Admiral Markham in CAMPERDOWN. Tryon, an acknowledged expert in ship handling, ordered that the two columns turn inwards towards each other to arrive on reciprocal courses prior to anchoring. Unfortunately the two columns were only six cables (1200 yards) apart.
Because of the ships’ turning circles, this meant that a collision was inevitable. CAMPERDOWN collided with VICTORIA and the latter sank in about 10 minutes. Admiral Tryon and more than 350 of the ship’s company went down with her. Crewmen and sailors jump over the side as the ship starts to sink, it sank very quickly (The front guns and turrets weighed a massive 110 tons; she was that weight that took her down as fast as she did) in an instant the Mediterranean fleet had lost its admiral and her flagship. 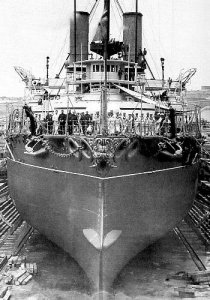 The subsequent court martial placed the blame on Tryon. No culpability was assigned either to Markham or Tryon’s Flag Captain. A stunned Britain and admiralty wanted answers. How could such a catastrophe have occurred? Why did no one prevent the collision? Why did the Victoria sink so fast, when the damage she sustained was limited to her bows only? 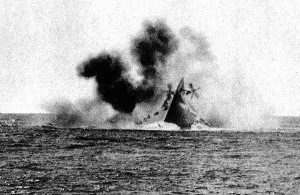 Since she sank, divers have wondered where the VICTORIA lay and if she could be visited by underwater explorers and salvage companies in the hope of solving her secrets.

HMS Victoria, one of the flagships of the Navy’s Mediterranean Fleet, has been discovered off the coast of Lebanon, 111 years after being rammed by another British warship during maneuvers, and sinking with the loss of 358 lives. The disaster was the largest peacetime loss of life in the history of the Royal Navy.

Christian Francis a Lebanese-Austrian diver who has been searching for the wreck since 1994 he has been running Lebanon Divers for over 10 years. He has been looking for HMS VICTORIA for even longer after hearing fishermen’ s stories and visiting Tripoli (VICTORIA) Naval Cemetery, dedicated by the Admiralty to the sailors who perished on the 22nd of June, 1893. Creating a virtual shrine to HMS VICTORIA, Christian visited repetitively the National Maritime Museum in London, British newspaper and historic archives, gleaning information about the sinking that might one day lead to the ship’s discovery.

At Court-Martial, Flag-Lieutenant Guilford mentioned some important information during his talk “The Admiral remained on deck. He asked the Staff Commander what water we were in; he replied deep water, 70 or 80 fathoms.“ When Christian Francis read these words in at the National Maritime Museum, he realized the wreck was at touching distance.

Christian Francis continues: This has gained me absolute certainty that I would find something, one day”. Indeed some fishermen have actually unknowingly fished the ships’ resting position, but modern depth sounding equipment has failed to reveal any visual clues to confirm the presence of the 400 foot long warship. The depth of the sea bed in the rough proximity of HMS VICTORIA is 150 meter deep, and as such, has excluded scuba divers from scouring the area searching for the ship by sight.

In March 2004 Christian met Mark Ellyatt in London, while researching – for a fifth time – British archives. He wanted to see if Mark’s technical diving experience and deep wreck finding skills could help in the search for HMS VICTORIA. Christian says: “I took my decision immediately, Mark inspired trust. And he had the ideal profile, being the deepest wreck video graphic around”. Mark was on board. Then followed a 3 months period of preparations, all focused on total success for the Project.

Boats were pulled out for yearly maintenance; new equipment had to be acquired, available equipment serviced and double checked, all for a team of four, all in double. Down lines and floats, on board electronics, tools were made ready. In July the two divers met at BeirutAirport and during the drive to the dive centre at Enfeh, Lebanon, discussed again their plan of attack that would allow a dive team to dive and confirm the identity of the wreck. As Christian wanted to obtain as much video footage as possible, many practice dives were carried out to improve confidence and mobility in deep water. After approximately 22 dives to a maximum depth of 122 meters, the divers and support team were working smoothly and it was time to complete a fly past of some possible wreck positions. The initial plan was to make a series of exploration dives to 120 meters and drop magnesium flares to illuminate the sea bed below.

The electronics on board the dive boat did reveal again the same echoes encountered a few months before. But the relative height above the sea bed was so low that it suggested the 10,400 ton vessel had submerged into a soft mud or sediment. Suddenly, the depth sounder revealed a highly unusual image that showed a large object seemingly floating in mid water, looking like what could have been a large trawl net that was tangled around wreckage at 500 feet depth. It could not possibly have been the wreck itself. Days and hours were spent searching for the highest point. The time was nearing 16:00 PM and the sun low in the sky. The divers had enough and decided to go for the highest echo, “the trawl net”. Haidar threw the weighted down line.

Christian continues: “The trip was joined by Major Paul Pitchfork who flew over to assist the team at Mark’s promise of some deep wreck finding and he was to be our back-up/safety diver.

Below is one of several on YouTube videos that show HMS Victoria wreck during the finding process, Christian Francis and other experts assure that this is the only Wreck that stand vertically at 90 degrees. Enjoy the video:

Christian explained his experience by saying:”At 16:05 the three of us went down. Visibility was easily 30 – 40 meters, the seas relatively calm, water temperature a comfortable 28 C and almost no current and. Deeper and deeper, ambient light was starting to turn into a deep blue twilight, the line was guiding us into the dark at a diagonal angle. At reaching about hundred meters down – we should have been deep enough, and once again looking around to see if the net was anywhere close, I saw a huge shadow in my peripheral sight to the west, our left. At once, the team stopped descending into the darkness, as we had suddenly all realized that a huge shadow was looming in the distance, but closes enough to cut ambient light. At depth the current had died down and we all let go of the down line swimming at a steep angle towards this strange sight, going instinctively for it’ s highest point. I was keeping in mind that we were swimming in dangerous waters, possibly infested with fishing lines, hooks and nets. My torchlight was put to use, scanning the water for eventual lines & hooks, lost in mid-water. Looking to the other two, I made sure that we swam in a squadron. The closer I swam, the better I could make out the outline of what was to become my life’s most unbelievable sight! Suddenly, time stopped.”

He added: “Victoria’s propellers were there, frozen in time. Tryon and all 358 men lost when she sank came to my mind in a religious moment. This is when my hand reached to the regulator I was breathing from and took it out for my lips to touch the wreck. I kept hovering above the props for a minute or two. Looking down alongside the hull it looked enormous as a school of fish was circling the wreck in a tight procession. Mark and Paul looked both fine; nobody really had eyes for anything else but the wreck. Suddenly, the back cannon deck side came to my mind. I swam over the stern, past the flag pole that had no flag (it must have rotted away, I thought) and looked down to see it’s mouth still covered, pointing to towards me a few meters below. The wood on the upper deck was still all there, well preserved. Little fish were everywhere, the whole scene was surreal.”

Christian continued: “VICTORIA was indeed standing completely vertical, its bows surely buried into the sea bed. The original photographs showed the ship as it slipped below the waves 111 years before, it had indeed sunk bows first with the propellers still turning at near maximum revolutions. The bow of the Victoria was fitted with an enormous metal ram that would have pushed deep into the soft clay of the sea bed and combined with the sheer weight of the vessel and continued downward thrust of the propellers ensured the ship took a good purchase of the seabed and stood like a tombstone all this time waiting for discovery. We had made the greatest wreck find imaginable; the 10,400 ton HMS VICTORIA was standing in front of us oriented completely vertically and looked in excellent condition.”

And regarding the name of Victoria, Christian said: “The sight of the enormous rear facing gun and the propellers confirmed that this was the right vessel, but reading the ship’s name VICTORIA as it clearly stood out in 12inch raised letters, positively identified it. Now that the descent line was out of reach, Mark used his primary reel (Kent) with its 120 meters of yellow line to tie a temporary up line to ease the ascent and mark HMS Victoria’s exact location.”

Christian ended his worlds by saying: “It was important not let this breathtaking scene make us deviate from our dive plan. I was mindful of the time we had spent at depth already approaching 15 minutes between 120m and 90m. We could spend just 5 more minutes at 77m before the original decompression plan was compromised.”

Christian Francis also brought to our attention the fact that 6 bodies were recovered from the sea after the sinking and were buried in a special cemetery in Tripoli (see photo). The Ottoman Sultan had offered a piece of land on which the cemetery was built. He did this as a sign of friendship towards the UK and a plaque witnessing this is also placed inside the cemetery’s walls.

You see also the Memorial that was made to the officers and men who lost their lives onboard HMS Victoria, The memorial was originally erected in what was then the Town Square, but was removed to Victoria Park in 1903, at the request of the survivors, in order to offer it better protection. (It is located at the main walk through Victoria Park, UK)

The only wreck that stands at 90 degrees, tell us what you think about this post, your comments and feedback are highly appreciated. Wait for our next posts for other diving sites, where you can enjoy diving in Lebanon.